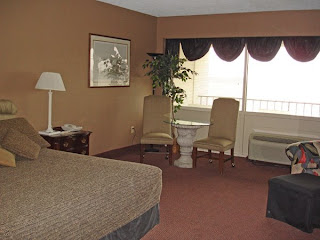 Earlier this week I was at the Executive Inn and took a peak at some of the rooms after they have been cleaned. Here is one of the king rooms. Like I promised, I'll post new information as we received it at AQS. 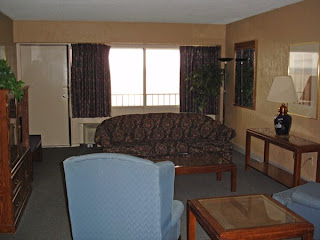 To the right is a photo of the living room portion of one of the suites. Each of the suites will have a coffee maker in it. 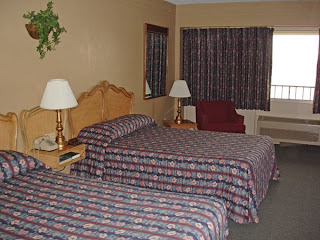 This is a double bed room.

Below is a bathroom in one of the rooms. Some quilters have been asking what amenities would be included in the rooms at the hotel. Here is the list that we've received: hair dryer, iron and ironing board, soap, shampoo, conditioner, and hangers. Only the suites will have a coffee maker. 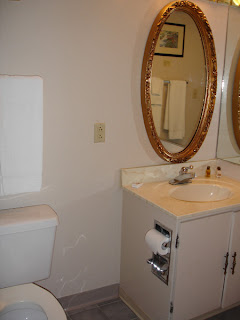 I have to say that I haven't seen the hotel this clean in a long time. They are finishing the cleaning of the remaining rooms now.
.
In just a few short days, for me at least, we will all be at the hotel, convention center, and expo center for the show. Next weekend the quilts will be judged - good luck to all 388 contestants who have a quilt as a semifinalist in our 25th Anniversary AQS Quilt Quilt.
Posted by Latest News from AQS at 8:10 PM

how about the mini-fridges we are so used to having?

will there be any free wireless internet in the hotel, or is there a website that lists wireless areas in Paducah?

These are the ones listed by the City. Of course, many businesses have free Wi-Fi too. I haven't heard about the hotel, although I know it used to have it.

Convention & Visitors Bureau at 128 Broadway. Signal extends outside onto Broadway and into the large downtown parking lot.

The Skatepark located within Noble Park

Paducah's Riverfront. The benches and area on the riverfront between Broadway and Kentucky have the best signal.

I will be staying at the Executive Inn this year, BUT I have a reservation at the Budget Inn across from the Rotary that I am looking for someone to occupy. It is for Wed-Sun am--4 nights at $65 each night. Our group usually stays there. It is not deluxe, but affordable and in town on the bus route. (used to be called the Red Carpet Inn) IF YOU KNOW OF ANYONE LOOKING FOR A ROOM--PLEASE EMAIL ME AT quiltmom@windstream.net. THANKS FOR YOUR HELP!! I didn't think that I had a chance at the lottery drawing at the Inn.