Kudos to our Lancaster Volunteer Quilters

Congratulations to Beth Bigler, Vicki Bowman and Jeanne Riley of the Red Rose Quilters Guild, who coordinated the volunteers who assisted with the AQS Quilt Show held in March at the Lancaster County Convention Center in Lancaster, PA. It takes many hands to produce a show as large as the AQS Quilt Show, and the quilters in the area provided more than 1,000 hours during this 2010 event. This was the largest event ever held in the city of Lancaster and these quilters helped blaze the way to holding other large events in this new convention center.

Recently the Lancaster New Era newspaper recognized the quilters with the Red Rose Award. Congratulations quilters! This is a well-deserved honor. 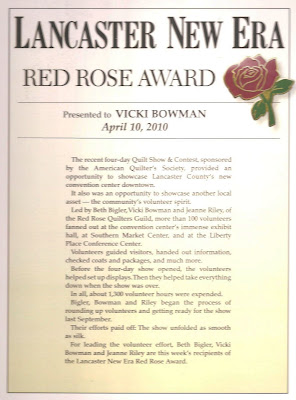 Posted by Latest News from AQS at 9:47 AM

It was a great show. I personally know that Vicki Bowman worked very hard to round up other volunteers as well as put forth the effort in working the show. I'm sure the other two ladies contributed as much or more. Thank you to everyone who made this show so outstanding. Those of us in the DelMarVa area thank AQS for coming so close to us.