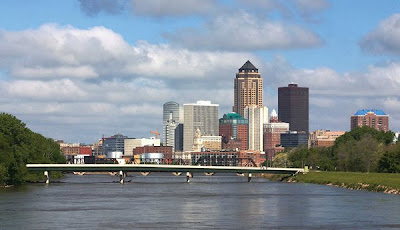 
The show will be located in Hy-Vee Hall at the Iowa Events Center, 730 3rd Street, in downtown Des Moines.


Lodging: If you still need to make your hotel reservations, here is the link to the list of hotels on the AQS Web site: http://www.americanquilter.com/documents/shows_contests/desmoines/08_desmoines_hotel.pdf.
Just call the hotel directly and tell them you are coming to the AQS Quilt Expo so you'll get our quilt show rates. Don't delay in booking your room though, those rates will end soon and you'll be paying higher rates.


This is going to be an exciting event -- there are 800 quilts on exhibit, including the annual show of the Greater Des Moines Quilters Guild. More than 350 vendor booths will make it a quilt shoppers' paradise - you know they will have all of the latest tools and fabric that you just need to add to your stash.

Check out the next blog entry for information on our special Dressed Up Denim Lab, where you can jazz up your own denim jackets, jeans, vests, and more.

Posted by Latest News from AQS at 6:16 PM No comments: 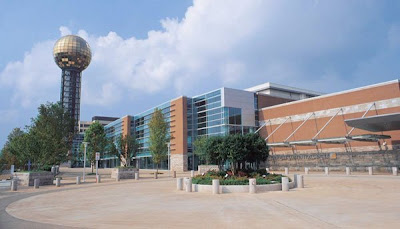 Shuttle service is not provided from all of the hotels. If you will need shuttle service, look at the hotels in the downtown area. Here is the online map for the free shuttle service:
http://www.knoxville.org/eguide/zoom.php?ID=7&guide=NaN .

If you need additional assistance on whether this service is available from your hotel, please call the phone number above for making reservations.
Posted by Latest News from AQS at 5:46 PM No comments: 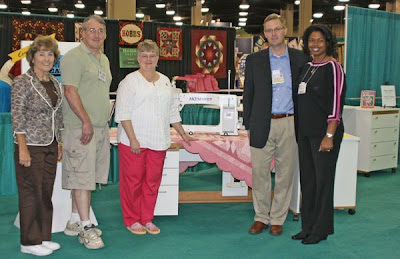 Connie Guthary, Aurora, Illinois, was thrilled to learn that she won the AQS Nashville Bound Giveaway. Her prize was an ultimate quilting studio: HQ Sixteen™ Longarm Machine with table and frame, cabinetry for her sewing studio from Tracey's Tables, and a free trip to the AQS Quilt Expo.

For a complete list of all winners in the AQS Nashville Giveaway, go to:
http://www.americanquilter.com/shows_contests/nashville/2008/giveaway/ .

Posted by Latest News from AQS at 5:12 PM No comments:

Two more members of our staff -- Marge Boyle, Director of Sales of Marketing, and Cindy Carrico, Assistant Show Director.
Cindy handles the quilt entries for each show, and also works with the instructors...as well as all of those other duties as assigned.
Marge helps out at the Workshop Desk during the shows, but her regular duties include selling and marketing AQS books and membership, as well as handling advertising for our events.
Posted by Latest News from AQS at 5:07 PM No comments:

Many of you talk to members of the AQS Quilt Show staff as you are registering, entering your quilts, or maybe just to ask a question.


Marcelle Cashon is our new Registration Coordinator. She processes the registrations and makes sure you receive your name badges for the show.


Look for Marcelle at the Workshop Desk at our shows.
Posted by Latest News from AQS at 5:03 PM No comments: 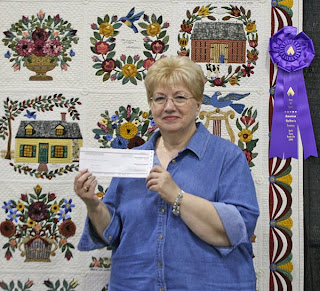 Dawn Gerber, Hanover, Pennsylvania, shows off her check for $10,000 for winning the Best of Show award at the AQS Quilt Expo - Nashville.
Watch for more information on Dawn and her prizewinning quilt in the next issue of American Quilter magazine.
Posted by Latest News from AQS at 4:49 PM 1 comment:

Nashville was a Great Show! 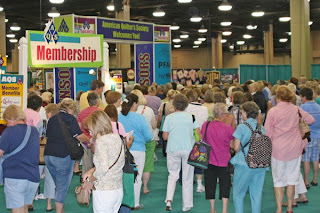 The quilters couldn't wait to enter the AQS Quilt Expo in Nashville, Tennessee. The quilts were great and there were plenty of vendors in the Merchant Mall. What more could a quilter ask for?
We'll miss Gaylord Opryland Resort next year.
The dates for next summer's show are July 22 - 25, 2009 and the Expo will be held at the Knoxville Convention Center in Knoxville, Tennessee.
Posted by Latest News from AQS at 4:44 PM No comments: 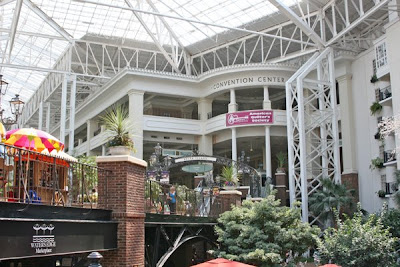 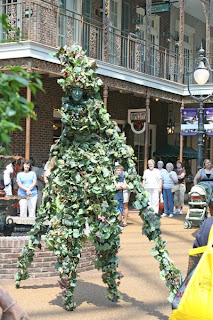 It is just a few days before the AQS Quilt Expo opens at Gaylord Opryland Resort in Nashville, Tennessee. Join us as we visit Music City USA for the eighth time. Quilters from around the world will enjoy seeing more than 500 quilts on exhibit, including five categories in the AQS contest, where one quilter will win the $10,000 Best of Show Award. The special quilt exhibits will range from More Than Warmth, quilts made by children, to the American Quilt Study Groups exhibit of quilts inspired by 1840s quilts.
Look for DiVine in the Delta area just outside the Convention Center. You won't believe it until you see it. You might walk up and see this vine along a post...and all of a sudden it moves.
Special quilting celebrities include Billie Lauder (Wednesday); Joe the Quilter: A Musical Quilt Show by Joe Cunningham (Thursday); Afternoon Tea with Jodi Barrows, Show & Tell with Eleanor Burns, and Dear Jane Turns 12: Anniversary Celebration with Brenda Papadakis (Friday); and Brunch with Sue Nickels (Saturday).
Don't forget to experience Nashville by attending the Grand Ole Opry on Friday or Saturday evenings, or a cruise on the General Jackson Riverboat.
The Workshop Desk opens at 12:00 noon on Tuesday. Check there for ticket availability on workshops, lectures, and special events.


Put on your walking shoes and join us at Gaylord Opryland...it's just one week away!

I'll let MaryJane tell you how she became a "farmgirl" raising organic fruits and vegetables...and a whole lot more.

Five years ago, before the idea of MaryJanesFarm and my playful definition of “farmgirl” made the newspaper that Toni read, I was known as Paradise Farm, since my little five-acre piece of paradise was nestled at the base of Paradise Ridge. When I bought my piece of ground some 20 years ago, I dreamed of making my living as a farmer. My first season here, I sold green bell peppers, pickling cucumbers, and other odds and ends. But to make more money from my crops, I needed a longer growing season. So I built six hoophouses that I had to crawl into on my hands and knees. It was good training, because for the next 15 years, keeping my farm and making a living required lots of kneeling — the late night prayerful variety that builds mighty calluses on both kneecaps. During the Paradise Farm era, when my daughter was all of 7 years old and still letting me put her hair in two braids, she zenned me in a stunning way. A single mom living the homestead life, without indoor plumbing, without money, I drove a car so old we wore masks in it because it sucked dust in through the rusty floorboards (my son remembers getting his leg stuck in one of the holes), when late one evening coming home from town, the driveline fell off. It jammed into the ground like a javelin. Crying, I lifted my 3-year old from his seat and the three of us began to walk. My daughter grabbed my hand, “Momma, there’s always something good out of something bad.” With her words as my mantra, I survived the next decade by reinventing myself over and over again, growing this, growing that, trying this and trying that.

My mother had seen to it that I had a passion for feeding people, and my father had taught me how to grow absolutely anything. Given I’d worked for the Forest Service right out of high school, and I wanted to create a secure value-added market for other local farmers, I eventually ended up with a line of backpacking foods — the kind of foods I would have liked when I was backpacking as a wilderness ranger.

You'll hear more about her journey to make a living with her organic farm at the Lunch with Mary Jane Butters at the AQS Quilt Expo in Des Moines. She has experienced lessons we can all learn from in whatever we endeavor to do. Registration for this lunch is open on the our Web site, http://www.americanquilter.com/shows_contests/desmoines/2008/registration/ .

Are you a farmgirl? MaryJane definition of a farmgirl... is anyone who sews or knits or weaves (or wants to learn how). A farmgirl remembers her mother or grandmother paring apples for pie. A farmgirl believes in the strong arms of friendship, community and the just plain fun of being together.A farmgirl believes in connection. a farmgirl ...isn’t afraid to go it alone. A farmgirl takes joy in the quiet satisfaction of making things with her own hands. A farmgirl wants a world that is sane, and just, and clean, and is willing to do her part to make it so. A farmgirl doesn’t have to live on a farm. There’s a farmgirl in all of us. Farmgirl is a condition of the heart.

Learn more about MaryJane Butters on her Web site: http://www.maryjanesfarm.org/About/farmlife/searching.asp .
Posted by Latest News from AQS at 9:04 PM No comments: 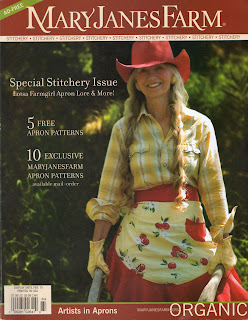 One day I picked up a copy of MaryJanesFarm at our local book store. I bought it because it was a Spcial Stitchers Issue - now that title would entice any quilter to read further.
This magazine was full of interesting stories, and had a great article (and some patterns) for aprons that are in fashion again. I called MaryJane to see if she would lend some of her aprons for our AQS Quilt Expo in Des Moines, Iowa.
Our brief conversation ended with MaryJane agreeing to share her aprons for an exhibit and to come teach some needlework classes too.
Just who is MaryJane Butters? Read more in the next Blog entry.
Posted by Latest News from AQS at 8:49 PM No comments:

Thursday, July 31, was the final day for advance registrations for the AQS Quilt Expo in Nashville. We still have name badges to print for those of you who registered after July 9 - badges received by July 9 were mailed.

If you registered after July 9, you will need to pick up your name badge at the Workshop Desk in Ryman C Exhibit Hall at the show. All international name badges are held for pickup at the show too.

A few of you received your plastic badge holder in the mail. We experienced some problems with them going through the mailing equipment and did not mail the rest. If you did not receive a badge holder, you can pick one up at a special table right next to the Workshop Desk. Look for the sign that says Name Badge Holders. Don't forget to bring your name badge and your confirmation with you.

We are definitely looking forward to a great show. There are more than 500 quilts on exhibit. Whether you enjoy viewing traditional designs, innovative art quilts, or those quilts that tug at your heart, there will be a wide variety of quilts. AND, you'll love the shopping at nearly 400 vendor booths in the Merchant Mall.