Many of you are awaiting your refunds from the Executive Inn. The date for the closing had been changed to April 2, but now I understand that is not a firm date either.

The refund money has to be paid by Mr. Singh - he is the one who cashed your checks. That money for the refunds will not be available until the closing has been held and some of the monies that would be paid to Mr. Singh are put into an account so the refunds can be issued.

Both AQS and the new buyers, Space Coast Hospitality, are as eager to get the sale of the hotel finalized as you are.

I'll keep you updated as new information is received.

AQS will hold its summer show, the AQS Quilt Expo - Knoxville, from July 22 - 25, 2009 at the Knoxville Convention Center.

The registration guide is printed and has been mailed to those who paid for a printed copy.

You can order a printed copy of the guide online too. Soon we will have the entire registration online so you can view or print a copy of all of the show information.

If you have not secured your lodging for the Knoxville show, it is easy and you can do it from your computer...here is the link:
https://resweb.passkey.com/Resweb.do?mode=welcome_gi_new&groupID=125209 ,
or you can call: 865-588-7426 or 1-800-753-3823. We are using the Passkey system for booking hotel rooms - that means you can choose a variety of hotels and room rates.

The downtown hotels, such as the Marriott Knoxville Downtown, Hilton Knoxville, Hampton Inn & Suites, Four Points by Sheraton, Crowne Plaza Knoxville, and Holiday Inn Select Knoxville - Downtown all have free shuttle service to the Knoxville Convention Center trolley stop. If you don't want to pay to park near the convention center every day, book your rooms in one of these hotels and ride the trolley.

We have a great group of instructors with some fun classes for you to choose from. As you know, many of the classes fill quickly, so don't delay in getting your registration processed. You can register online, or you can send your registration form via U.S. mail or fax (270-898-1173).

See you in Knoxville in July. This is a great spot for a family holiday...just minutes from the beautiful Smoky Mountains, Dollywood, and Gatlinburg.
Posted by Latest News from AQS at 8:03 PM No comments:

Daffodils are Blooming in Paducah 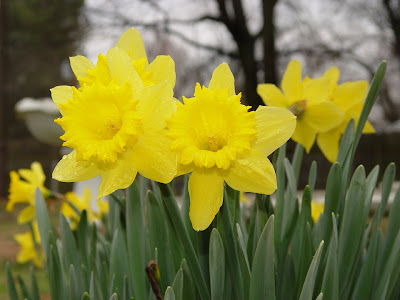 When the daffodils start blooming, you know the AQS Quilt Show will be here soon. The AQS office is a buzz of activity as we prepare for the show.

The name badges will be mailed early next week for those who registered before March 12. Be sure to store your confirmation letter and name badge in a safe place and to bring it with you to the show. The blue paper with your name and the item numbers for your confirmed events is your name badge. When you arrive at the show, you'll need to stop at the table by the Workshop Desk to pick up your plastic name badge holder to put the badge in.

Have you registered for the 25th Anniversary Celebration & Reception that will be held at 6:30 p.m. on Wednesday, April 22? There will be some fun surprises in store for those who attend. In addition to this year's winners receiving their awards, all of the past Best of Show winners will be honored - they are our special guests for this celebration.

We have had a couple of changes in locations of our events - due to construction at the hotel. The Annual Quilt Auction will be held at the Carson Four Rivers Center from 4 - 6 p.m. on Thursday. Viewing of the live auction items will be held there from 3 - 4 p.m. In addition, Live on Stage: 30 Years of Eleanor Burns will be held at the Carson Four Rivers Center on Thursday from 7 - 8:30 p.m. Buses will transport you from the AQS Bus Stop (4th St. & Executive Blvd.) starting 45 minutes before the start of each of these events; the buses will return to take you back to the AQS Bus Stop at the conclusion of the program.

Also, the Afternoon Tea with Nancy Zieman on Tuesday (3 - 4:30 p.m.) and the Brunch & Fun with Helen Squire on Saturday (9 - 10:30 a.m.) will be held in the rear section of the Patio Restaurant rather than the Showroom.

25 years - do you know that more than 10,000 quilts have been exhibited in Paducah since that first show in 1985. And AQS has awarded more than $2.5 million in cash awards to winners in the contests over these 25 years.

Many of the workshops are filled, but there are still a few seats left in some. You can check out the status of the classes on the registration site on our Web site. This link will take you directly to online registration.
https://events.americanquilter.com/getdemo.ei?id=41&s=_0V00YAFYK .

If you still need lodging for the show, there are still some homes available in the AQS Home Bed & Breakfast program that is coordinated by the Paducah Visitors Bureau.
Here's the link to their Web site for AQS B&B Guest Application and you can sign up right online:
http://www.paducah.travel//forms/index.cfm?formID=5 .

The Lights ARE ON!

Yesterday the power was turned on at the Executive Inn and crews immediately began work to get the hotel ready for the April quilt show. Bill Parsons, president of Space Coast Hospitality Management Services, said the rooms will be cleaned and ready for the quilt show. A professional cleaning company will begin work next week to "take everything out of the rooms, clean everything, shampoo everything and wash windows. The hotel will be clean," he said. Here is a link to today's Paducah Sun with more information about yesterday's press conference:
http://www.paducahsun.com/articles/stories/members_only/200903/04/0abL_news.html


Last week, Space Coast Hospitality and AQS staff called everyone who has confirmed reservations at the Executive Inn, and we also called those who did not get a room there with options for lodging in other locations. If you did not receive a call from Jan, Sylvia, or Bonnie about your room, please call Sylvia or Bonnie (270-898-7903) so we can verify the status of your reservation. After the closing on the sale of the hotel (tentatively scheduled for March 18th) arrangements have been made that full refunds will be returned to those who did not get their room at the Inn. These refunds will come from the closing money due to the seller. 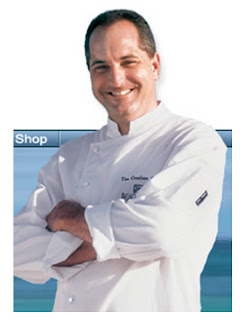 Chef Tim Creehan, who will be overseeing all of the food services for the show, will be in town next week to work with the AQS staff on food menus and locations of food concessions. We are excited to have a chef of this caliber working with us. He has an impressive background... In 1992, The American Culinary Foundation named Chef Creehan as one of the “youngest and most accomplished Certified Executive Chefs in the United States.” In 1999, Cooking Light’s Grandstand ’99 selected Creehan as “one of five chefs in the United States to be honored as a Shining Star Chef.” As part of this honor, he demonstrated dishes in front of thousands at Turner Field in Atlanta. In late 2003 at the DiRoNA International Conference, Creehan spoke on a panel to discuss marketing strategies in the industry. In early 2004, Creehan was selected as one of five “Celebrated Chefs” to represent the National Pork Council at various events nationwide. In 2005, Creehan partnered with DCS by Fisher & Paykel to act as their chef spokesman. In 1998, Creehan opened his flagship restaurant Beach Walk, which has since relocated to the Henderson Park Inn. For over a decade it has remained the most awarded and only fine dining restaurant located directly on the beach in Destin. A favorite with locals and tourists alike, Beach Walk is known for its meticulous service, innovative cuisine, and a stunning, unparalleled view.

There is a lot of work to be finished by April 22, but the hotel will be ready, the convention center will be completely remodeled, and AQS will have finalized all of the plans for celebrating the 25th anniversary of the American Quilter's Society.
Registrations are still rolling in - name badges will be mailed for all advance registrations received by March 11. If you register after that date, your name badge will be held for pickup at the show.
Letters to the quilt contestants are being assembled right now and should go into the mail today or tomorrow. Good luck to all of the entrants in the quilt contest.
.
We all hope that the dogwoods will be in full bloom so they can be a part of our Grand Celebration!
.
Bonnie Browning
Executive Show Director
bonniebrowning@AQSquilt.com
Posted by Latest News from AQS at 12:40 PM 4 comments: