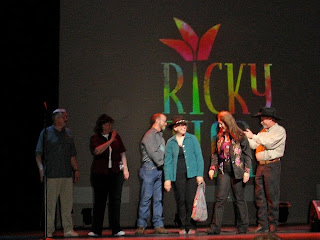 Ricky Tims did it again. He hit it out of the ball park with his Ricky Tims Concert last night. His human props at the opening made you wonder where and when Ricky would appear. Through a cloud of smoke, he appeared at his little red piano - a family heirloom that he recently had restored. 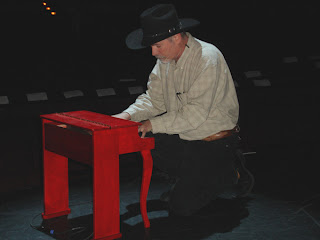 The legs and case were rebuilt, but the inner workings of the piano are all original. Now he no longer has to covet that piano his cousin received for Christmas when he was a very small boy - he owns it and can play it! 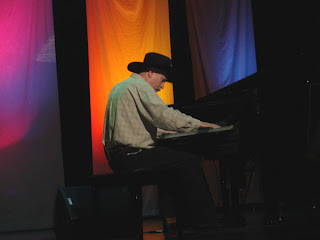 The maestro played a variety of songs - some from his upcoming Christmas album (I really liked Christmas in a Small Town), old favorites like Danny Boy, and Dance from his Sacred Age album. Yes, we all had our toes tapping! 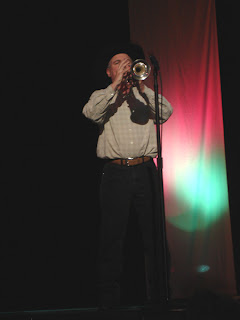 The evening ended with Ricky playing the trumpet and piano, and singing The Impossible Dream - an ode to quilters everywhere that they ARE CREATIVE!

Don't miss spending an evening with Ricky Tims at next year's show on Friday, April 23, 2010. Put it on your calendar now.

Aren't we lucky to have so many talented quilters? The beautiful quilts on display at the show certainly inspire all of us, and we loved being entertained by Nancy Zieman at Wednesday's tea; Keith Harrell, our keynote speaker, at the 25th Anniversary Celebration on Wednesday; Eleanor Burns on Thursday; Ricky Tims on Friday; and Helen Squire on Saturday.

Wow, what a 25th Anniversary Celebration this has been!

Posted by Latest News from AQS at 5:04 AM